8 months ago
Share this and help me to spread the word! 🤓

Continuous integration is a widespread practice in the software development industry.

And today you will learn a way to do continuous integration in Laravel projects with Bitbucket Pipelines.

Bitbucket Pipelines is the tool for integration and continuous deployment of the Git Bitbucket cloud platform.

In the free plan of the tool you have 50 minutes of build, which is the time spent to execute the continuous integration processes. That is, you can start using this very useful tool right now.

To run this tutorial you will need a basic understanding of:

So let's see how to do continuous integration with Laravel

After creating a Bitbucket account, create a new repository. For this tutorial we will call it laravel-pipeline. 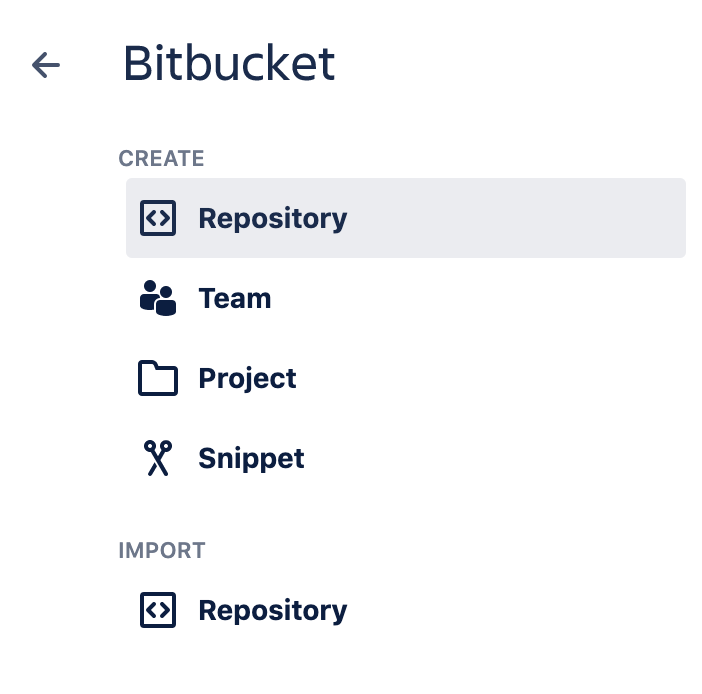 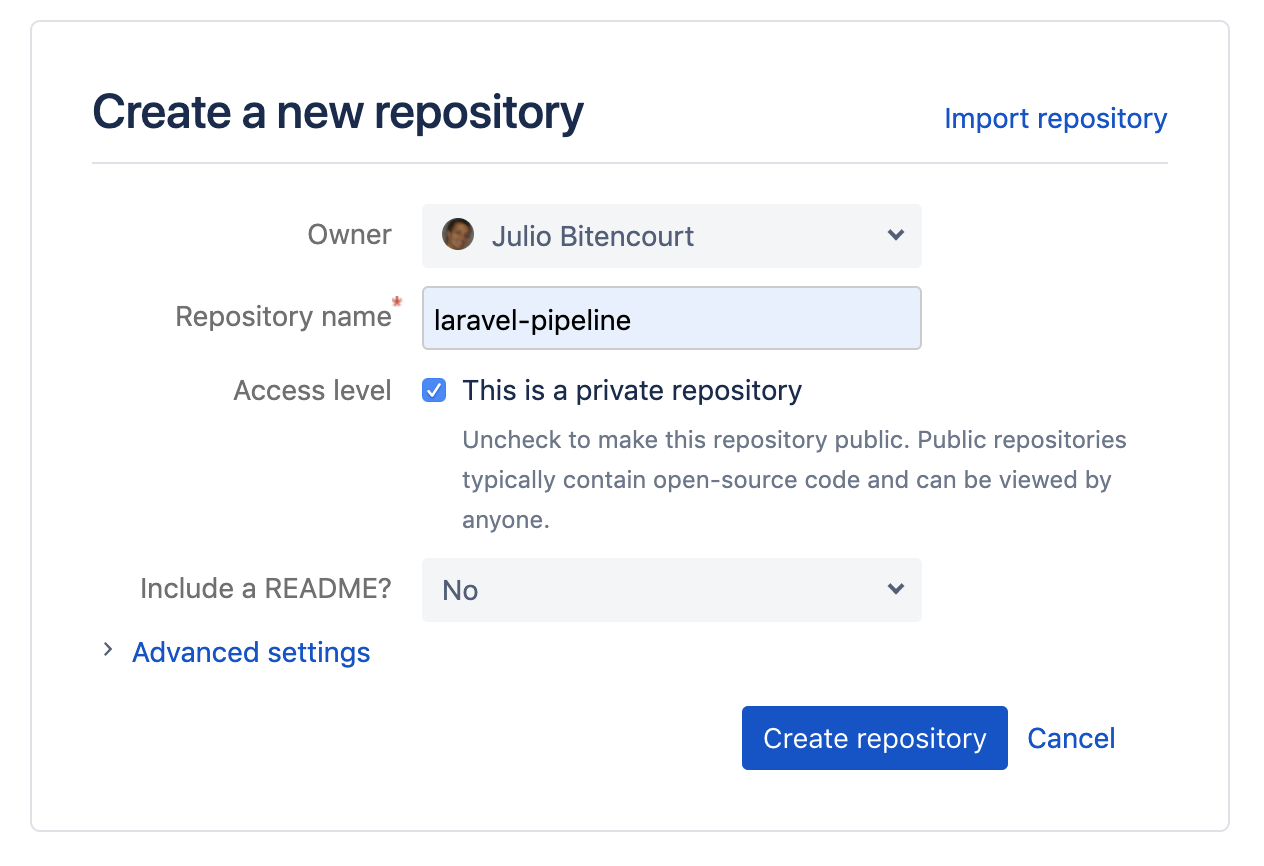 After creating the repository in bitbucket, clone it in your development environment.

Access the repository folder, add the remote and send the master branch to Bitbucket.

Installing Laravel - In this tutorial we are using version 7.x

Laravel can be installed in [two ways] (https://laravel.com/docs/7.x#installing-laravel). We will use the installation via Laravel Installer.

Still in the laravel-pipeline folder type.

After installing Laravel, run the automated tests that are included in the standard installation.

To do this, just type in the terminal: 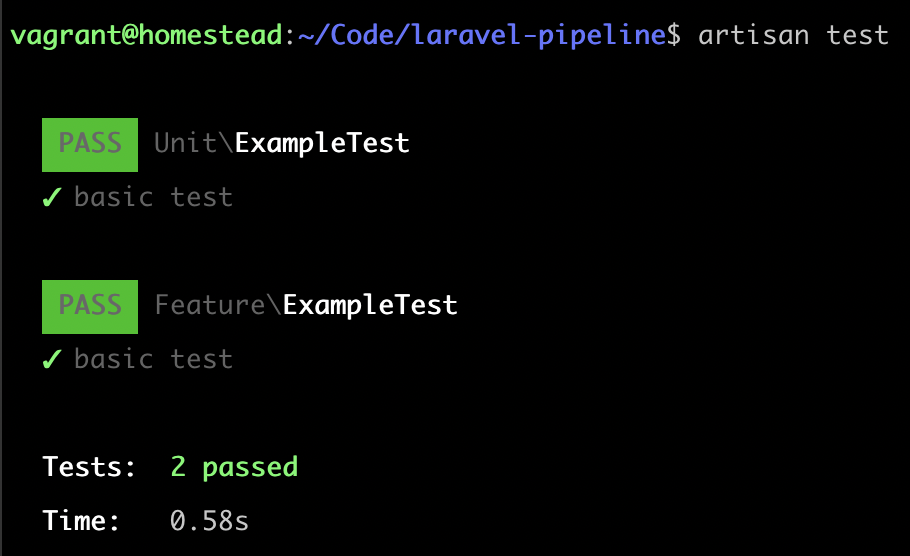 Done! Our code is already in Bitbucket and now we can start to configure the pipeline.

Configuring the repository for continuous integration in Bitbucket Pipelines

Access the repository settings and then the Pipeline settings. 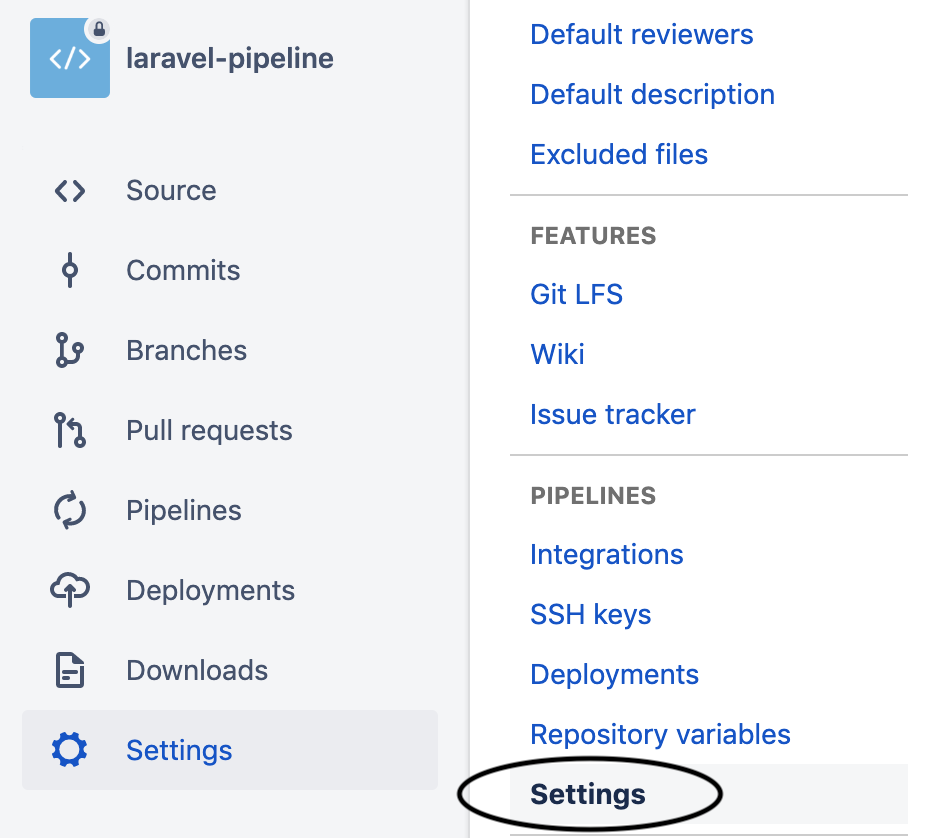 Then activate the Pipeline.

Notice in the image above that now we need to configure the file bitbucket-pipelines.yml

We need to configure two files in Bitbucket: bitbucket-pipelines.yml and .env.pipelines. 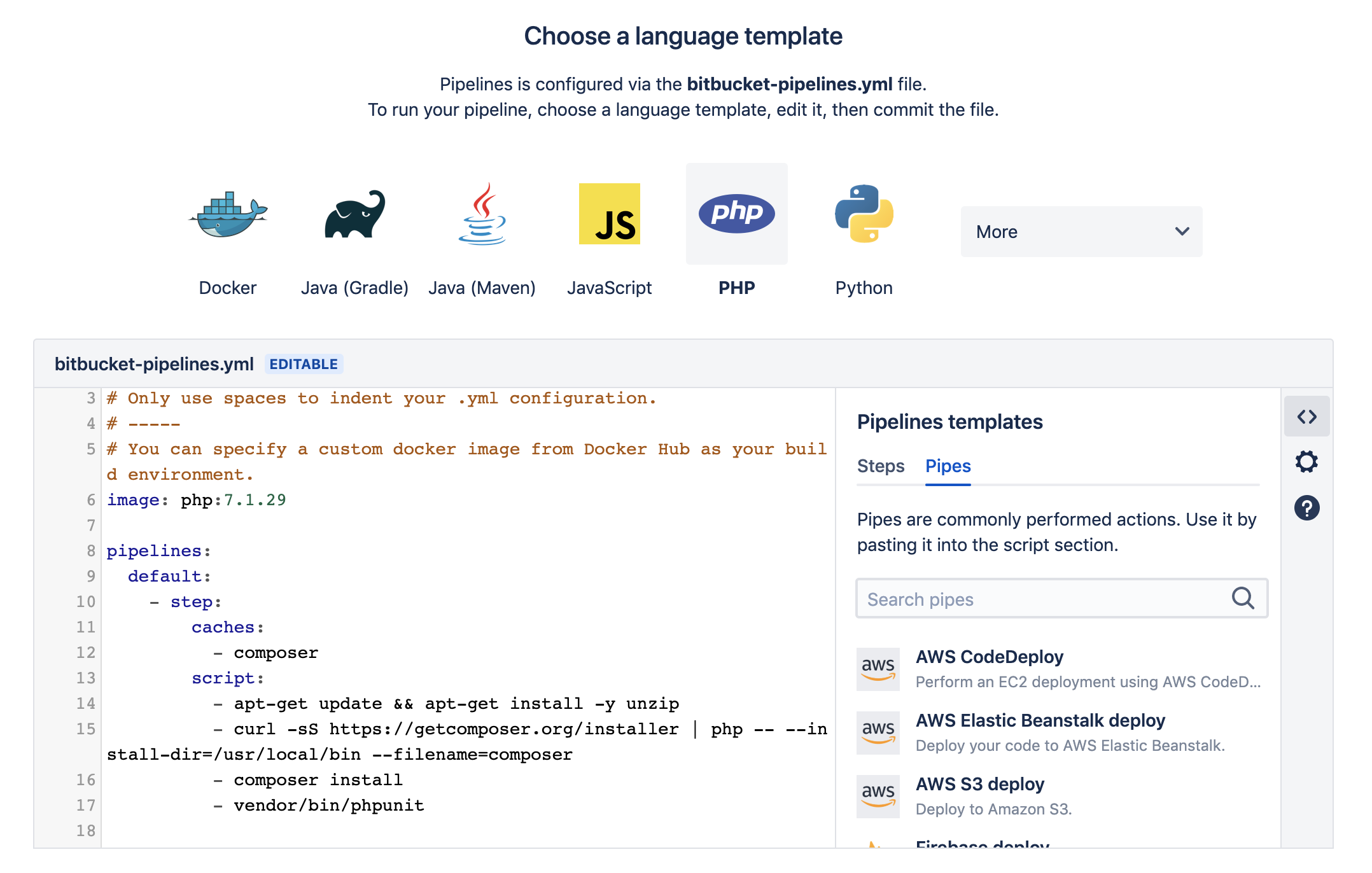 You can consult the various options to understand how they work. But in this tutorial we will create the file manually to practice well.

In your preferred editor create the file bitbucket-pipelines.yml at the root of the project, that is, in the folder laravel-pipeline.

Bitbucket-pipelines.yml, as the extension already shows, is a [YAML file] (https://yaml.org/). You don't need a lot of experience in this type of file right now as it is very simple to understand.

Bitbucket Pipelines uses Docker containers to perform the steps. The bitbucket-pipelines.yml file is the main configuration file for this automated flow.

In the first line of the file we see that we will use a docker image for PHP 7.4 with PHP-FPM configured.

In our example file we have two main sections: pipelines and definitions. Let's start with pipelines.

This section defines which pipelines are defined for this repository. default will be performed for all branches.

Each - step is an isolated step in the flow. The steps can exchange state with each other, but this configuration is out of scope in this tutorial.

In the step we define: name, caches, script and services.

Remembering that this is a basic configuration and it is possible to do much more with Bitbucket Pipelines. Including automatic deployment, as we will see in a future file.

I suggest you consult the documentation on the official website.

Running the scripts in the Docker container

We now use the docker-php-ext-install tool to install the pdo_mysql, bcmath and exif extensions that are required for this version of Laravel.

And last but not least, we created a symbolic link between .env.pipelines and the standard .env that will be used by Laravel during the execution of automated tests.

Then we ran the migrations and the test suite.

Defining the services to be installed through Docker containers

With the bitbucket-pipelines.yml file configured, all that remains now is to configure an accessory file with the environment variables that will be used by the service during the execution of the steps

This file defines the environment variables that will be used specifically for the execution of the pipeline.

From the moment the code is sent to the repository, Bitbucket Pipelines will identify this action and start the build process.

When accessing the Pipelines menu you will see that the pipeline is being executed for the commit that we created earlier. In this case, "Configuring Bitbucket Pipelines". 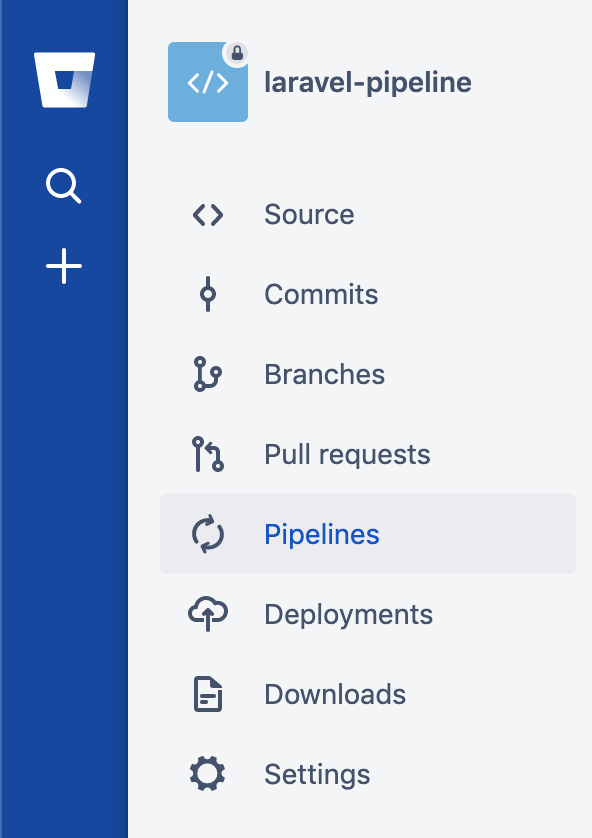 Click on the pipeline status and you will see the screen with all the steps being performed.

If everything went well, the build will be green 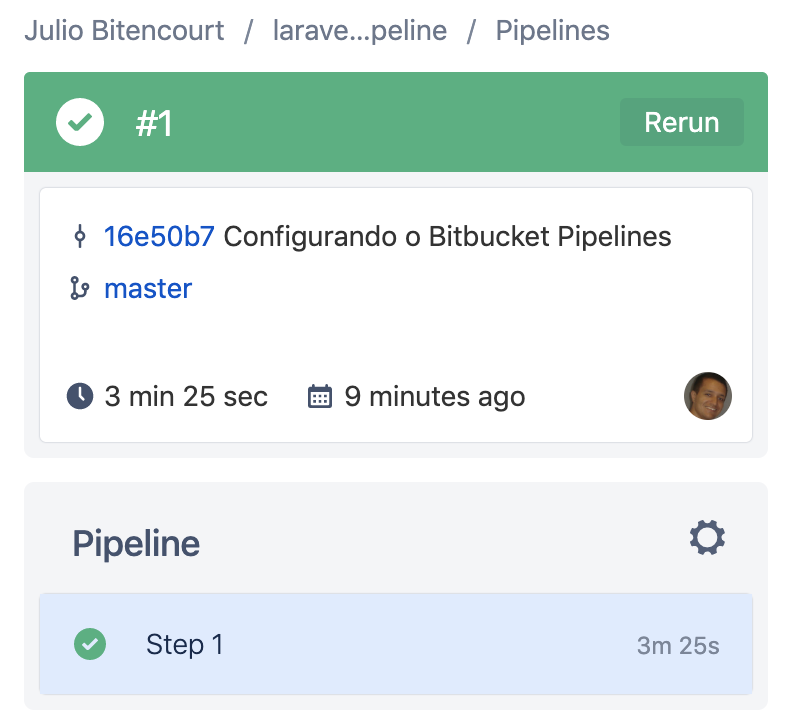 Now how about inserting an error in our code and sending it to the repository?

Let's force an error in our automated test.

Open the ExampleTest.php file located in the tests / Unit directory and change line 16 as shown below.

Now commit and upload to the repository.

After a few moments the pipeline will be executed automatically and when running the test suite it will fail. 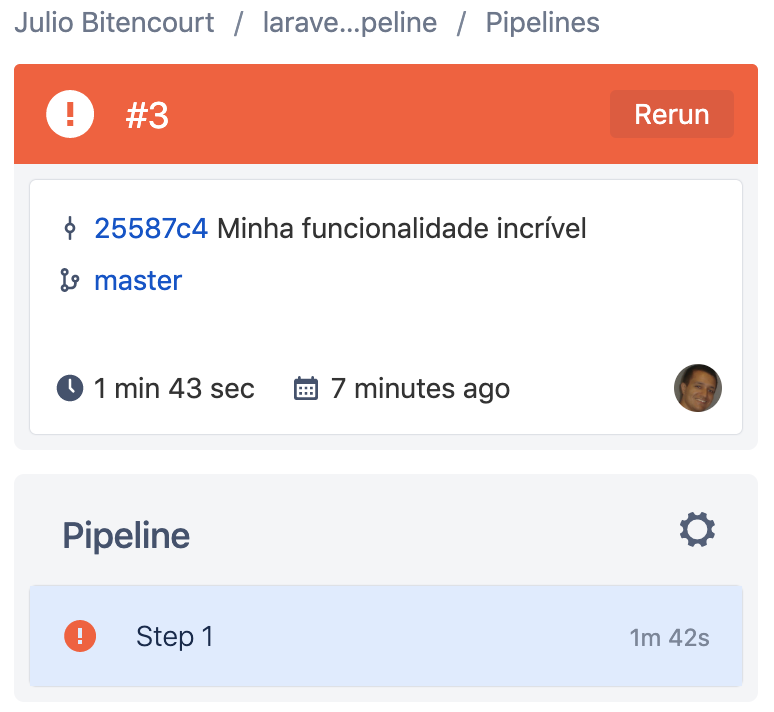 Check out the PHP Unit output. 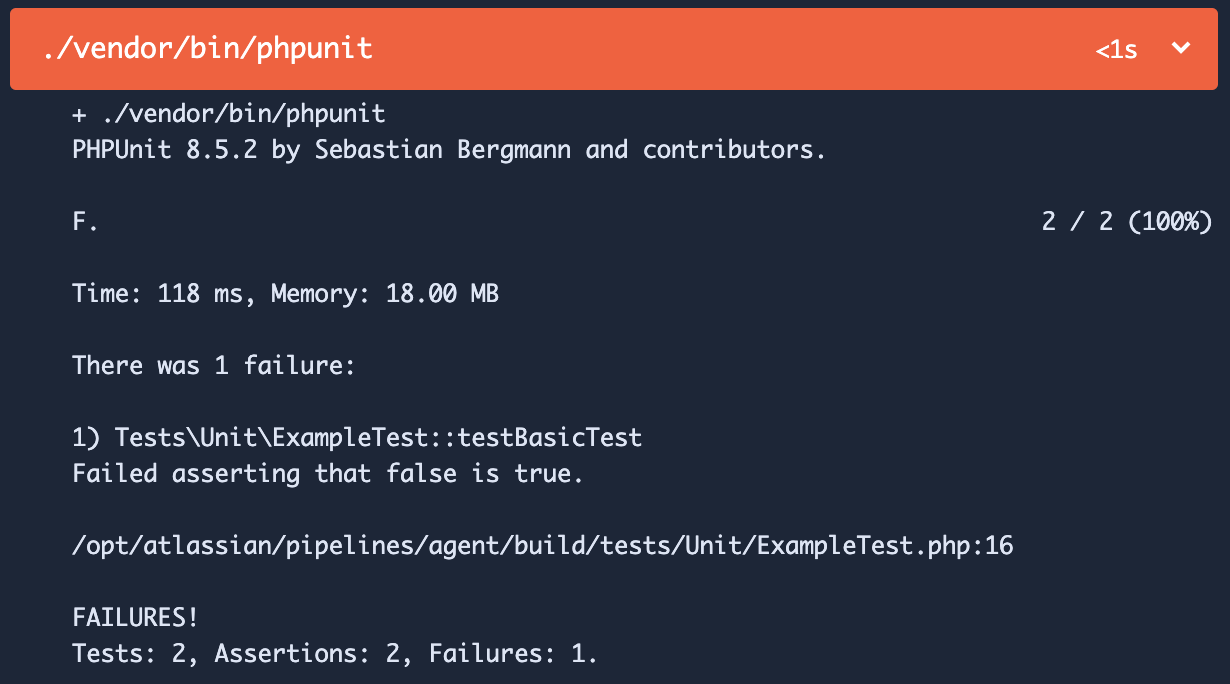 In this article we saw that with a little initial setup we can save a lot of time in locating and correcting errors in the future.

If you encountered any problems or have any suggestions please leave a comment and if possible share this article with your devs friends!